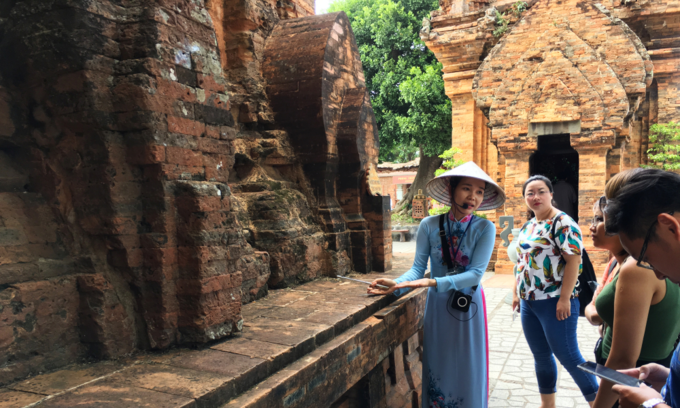 The shortage of quality personnel is a big challenge for the country's tourism sector. Photo by VnExpress

By Nguyen Van My  from VNEXPRESS

Steve Wolstenholme, chief operating officer for the Hoiana, said his company wanted to find Vietnamese personnel for senior leadership positions when the project comes into operation.

Hoiana, invested by Hoi An South Development Ltd, is a $4 billion dollar integrated resort located 30 kilometers south of Da Nang in central Vietnam. The first stage of the development comprising of three luxury hotels, a casino, dining venues, and a golf course is due to open in 2019.

Hoiana was expected to create jobs for more than 4,000 workers, mostly Vietnamese.

However, the company has struggled with recruiting, because the complex resort model is quite new and Vietnamese employees needed more time to learn about it before committing to it in the long run.

Wolstenholme highlighted the progressive attitude and spirit of learning as a big advantage that the Vietnamese youth have.

However, he said foreign language proficiency was a constraint that had to be improved through training programs.

According to the Vietnam National Administration of Tourism (VNAT), Vietnam currently has more than 14,800 international guides and more than 8,600 domestic guides. Most of them are concentrated in the tourist centers of the country and spread out unequally in foreign languages groups, with the foreign language most spoken being English.

Domestic tourism suffers a big scarcity of tour guides, too. VNAT announced there were 73 million domestic tourists in Vietnam in 2017. If more than 8,600 local guides are equally allocated, each must serve 8,400 visitors per year, working seven days a week, 23 tourists a day.

The shortage of tourism personnel is a big challenge for the training sector. According to statistics from the Ministry of Culture, Sports and Tourism's training department, the country has 192 entities involved in tourism training.

On average, the education system releases about 20,000 students of tourism studies to the market each year. However, the qualification of graduates does not meet actual demand, leading to surplus labor as well as unemployment.

The quality of training provided can be seen even in how courses are not clearly categorized. Tour guides are being trained under Vietnamese studies and there is no standard training program. Eighty percent of the courses is devoted to theory, and practical training is sparse.

One of the main reasons for this situation is the lack of connection between schools and businesses. Acknowledging this, some schools have collaborated with companies to increase practical training. To supplement their human resource base, many firms have contacted schools to establish a curriculum combining theory and practice.

Hoiana, for instance, has agreed to cooperate with the Quang Nam Intermediate School of Culture, Arts and Tourism to set up a vocational training center.

"We have opened two of the first certified courses in Asia on maintenance and operation of golf courses, and professionalism training classes in hotel management will be held after the Lunar New Year holiday," said Wolstenholme.

Muong Thanh Group, which owns more than 50 hotels and hotel projects across the country, struggles to recruit people.

"We have 16,000 employees, and at one point we opened up 12 hotels with huge demand for manpower, and it proved extremely difficult to recruit staff," Pham Hong Dung, deputy general director of privately-owned Muong Thanh Group, told the Vietnam Travel & Tourism Summit organized by VnExpress in Hanoi Wednesday.

General manager of Muong Thanh, Le Thi Hoang Yen, said many people have advised her to cooperate with a foreign corporation "to relieve stress."

However, over the years, Muong Thanh has persevered in pursuit of building a hotel chain with 100 percent Vietnamese staff. It has invited European experts to join it in developing a Standard Operation Process (SOP) with strict requirements in each profession. Personnel are trained in the SOP before working at the hotel.