VietNamNet Bridge – The demand for hotels in HCMC has been increasing rapidly, prompting investors to pour capital into hotel projects. However, it is difficult to find advantageous land plots to develop hotels. 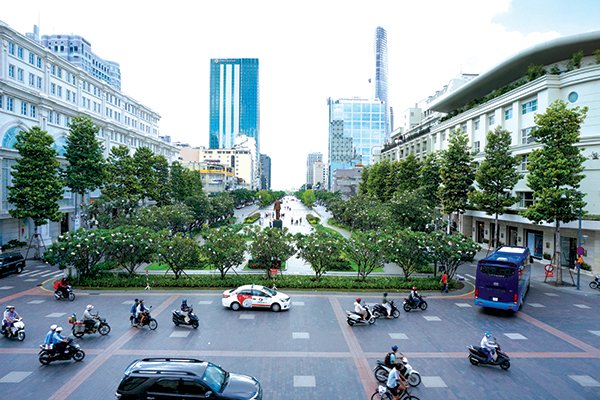 All hotels reported satisfactory business results for the first quarter of the year, with hotel room occupancy rate of over 85 percent, and a room rate increase.

Some hotels raised room rates by several dollars per night, while a 5-star hotel in the central business District 1 raised the room rate from $120 to $180 on peak days.
According to Savills Vietnam, a market analysis firm, the average occupancy rate of 3-5 star hotels in HCMC was 74 percent in the first three months of the year, 6 percentage points higher than the same period last year. The hotel room rate was $83 per night on average, up by 4 percent.

This was the first time in three years that 3- to 5-star hotels raised hotel room rates.

Analysts said that more travelers are coming to HCMC, while the hotel room supply is still short. Business opportunities for investors in the hotel sector are great, especially 3-5 star hotels.

“Our hotels in HCMC have been prospering for the last several years, not only now,” said Tran Hung Viet, CEO of Saigontourist.

“The prospects are also very good in the future as demand keeps rising while the city still lacks hotels,” he added.

According to the HCMC Tourism Department, in 2017, the city received 6.38 million foreign travelers and 24.9 million domestic travelers. The figures are expected to reach 7.5 million and 29 million, respectively, this year, and to 10-11 million and 33-35 million by 2020.

There are now 20 5-star hotels in HCMC with 6,257 rooms, 26  4-star hotels with 3,500 rooms, and 80 3-star hotels with 5,980 rooms.
Realizing the high demand, more investors have kicked off hotel development projects. Some build high-end hotels, while others develop hotels associated with shopping centers and condotels.

According to Bui Ta Hoang Vu, director of the HCMC Tourism Department, with the ongoing projects, the city will have 5,000 more 3-5-star hotels. However, this is still not enough and the city still needs tens of thousands of hotel rooms of the same standards.
“The demand keeps increasing in the high-end segment. We will need 15,000 more 3-5 star hotels within 5-7 years after 2020,” Vu said.

HCMC is a leading tourism destination with the number of foreign travelers to the city amounting to 50 percent of total foreign tourists to Vietnam. The growth rate in the number of tourists has been in the two digits, but the city is behind other localities in the hotel growth rate.